In 2014, Chris King sailed to the North Pole aboard the vintage tall ship, Antigua. During the month long exhibition, he lived and worked with a group of artists with a common interest, to learn more about the devastating effects of global warming in the Arctic. To pass time at sea, King created a replica of the ship, using wood matches he purchased on the island of Spitsbergen. Once the model was finished, he approached the Captain of the Antigua about burning it for his video. The Captain was insulted by the idea and proclaimed that burning a replica of the ship would "curse the voyage and put the vessel at risk". Respecting the Captain's orders, King halted work on the video and focused on other projects. The following year, the Antigua underwent a renovation expanding the hull of the ship. This ultimately changing the design from King's matchstick model, easing concern for the ship's wellbeing. Last year King revisited the wooden model he carried from the Arctic back to his studio in Louisiana where the video was completed in 2020. *Video is shown vertically when exhibited.
​
Drifters Pyramid (2020)
The Pyramid is constructed of gold foil emergency blankets, wood, acrylic paint, nylon cord, zip ties, neon duct tape, steel bucket, gravel, PVC pipe, adhesive hooks, photocopies of ink drawings on colored paper. 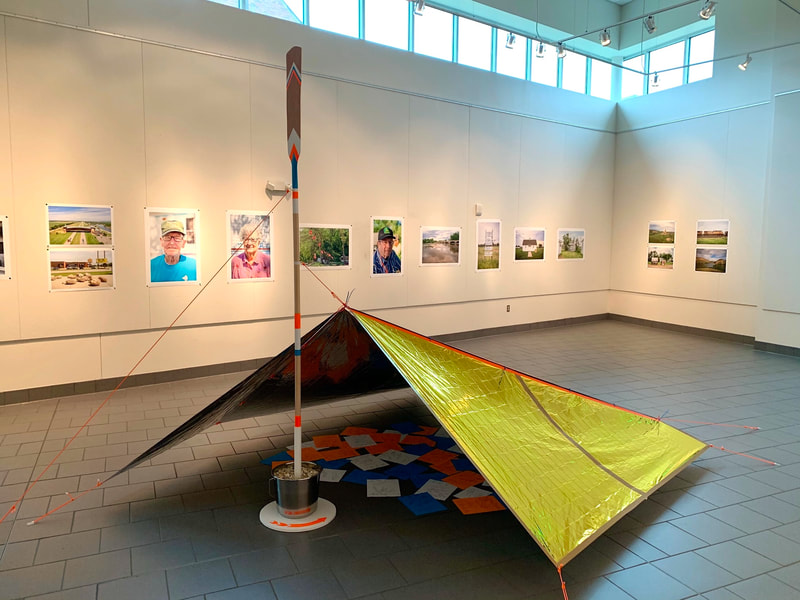 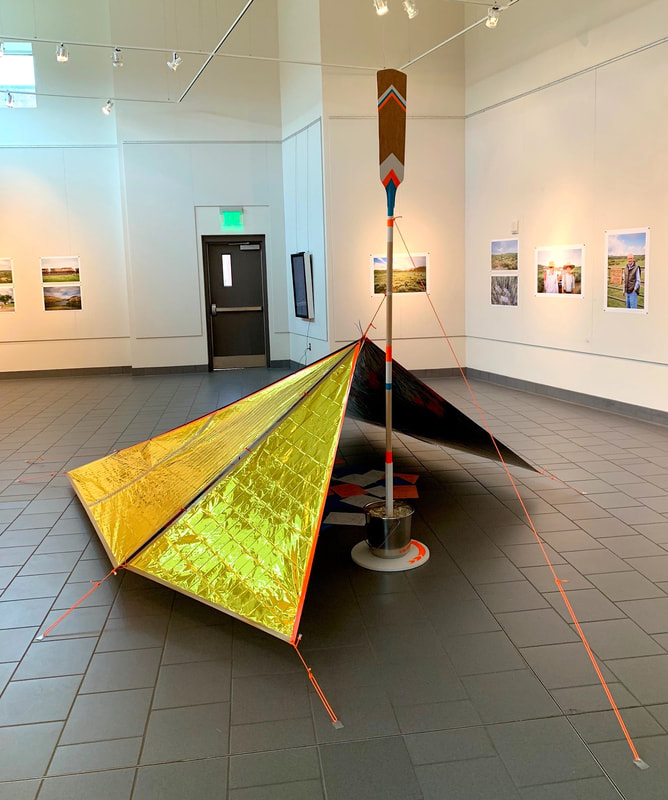 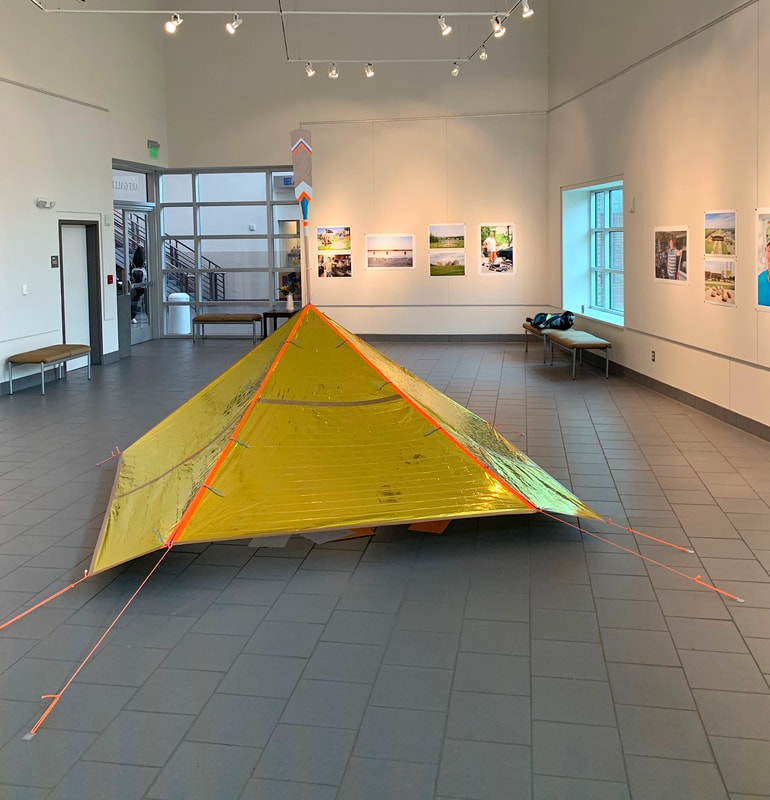 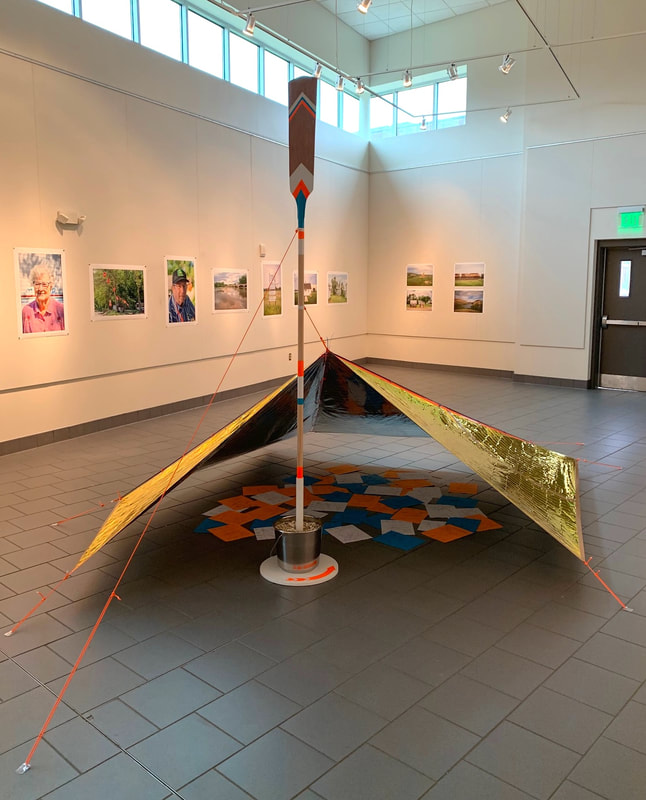 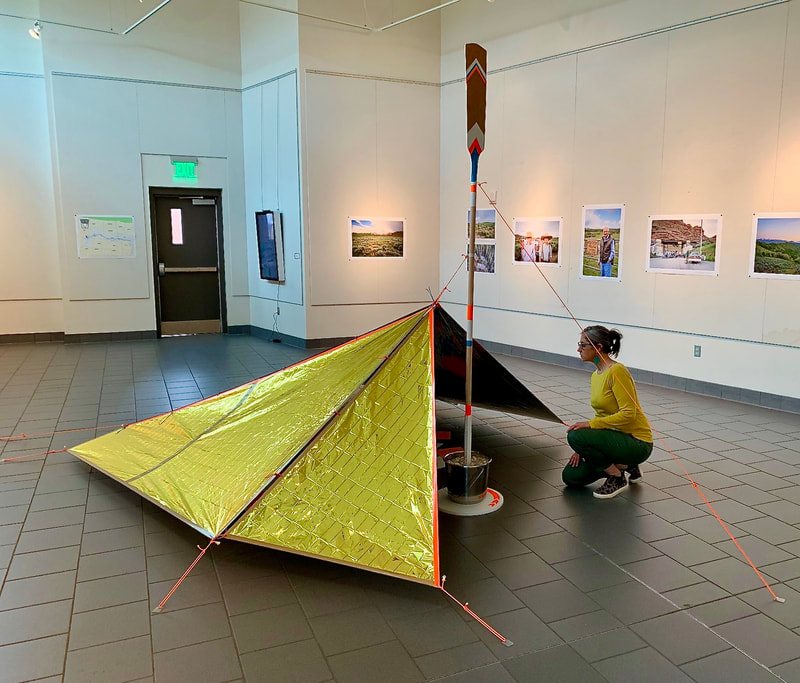 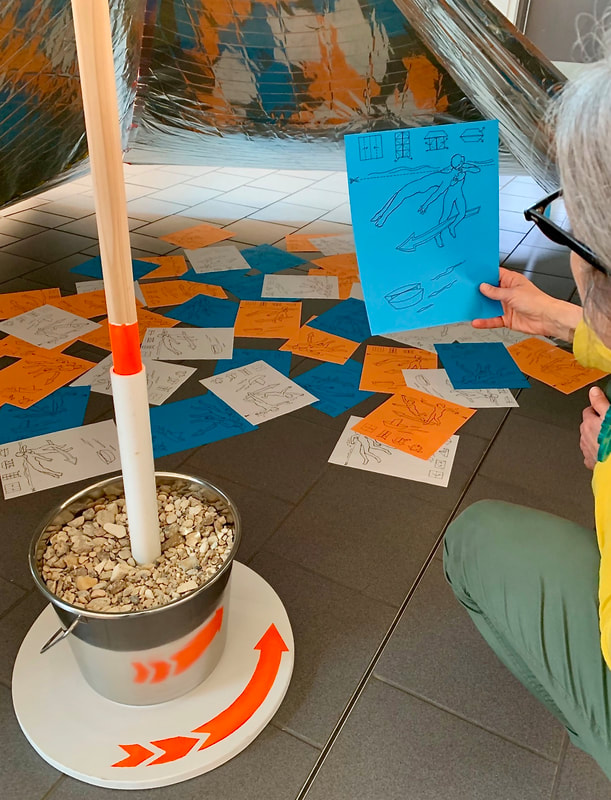 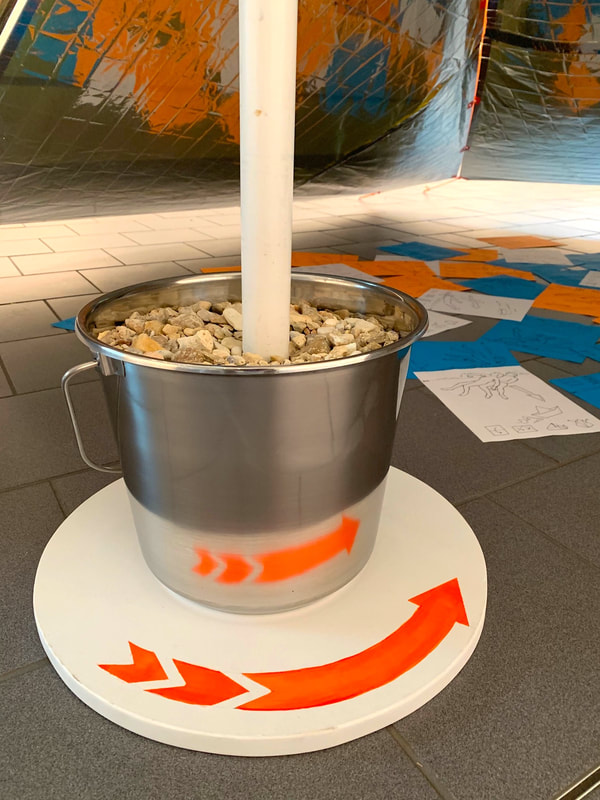 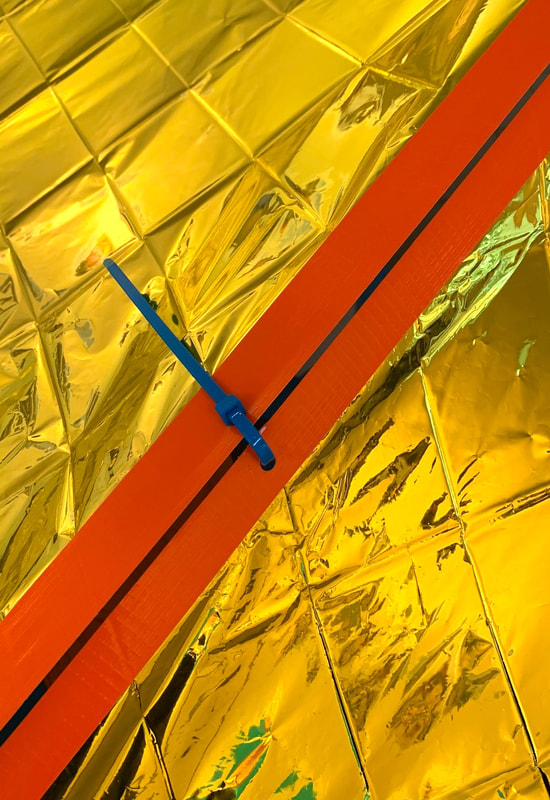 This installation was inspired when Chris King discovered a newspaper report outlining the financial benefits rural prisons receive by housing illegal immigrants over convicted criminals, including the prison in the town where King lives and works. The Department of Homeland Security recently announced that they've opened eight new prison facilities, seven of which are located in Louisiana. Many rural areas with limited opportunities view these prisons as job engines. Louisiana pays local sheriffs $24.39 per day to house those convicted of a crime. By comparison ICE pays $126.52 to house an immigrant detainee, which is five times as much. Rural communities such as these see this as a mounting concern for those who advocate on behalf of immigrants, because detainees in rural areas are facing higher barriers to obtaining a lawyer, are more likely to have their asylum cases denied, and more likely to be deported to their home countries. According to a 2019 NPR Analysis, of the over 55,000 immigrants currently detained, more than 52% are imprisoned
in these remote rural prisons, with little or no resources, legal representation, or access to family. King states, "I wanted the piece to resemble a mobile shelter, containing a series of drawings showing vague survival instructions and unclear plans of escape. I also
see the 'pyramid' as a sort of temporary monument or marker for those immigrants who are imprisoned just over mile a from my studio
​in Louisiana."
Shattered (2019) A series of three etchings created by shooting a 10mm bullet through safety glass. The glass is then inked and printed in a limited edition of five sets. 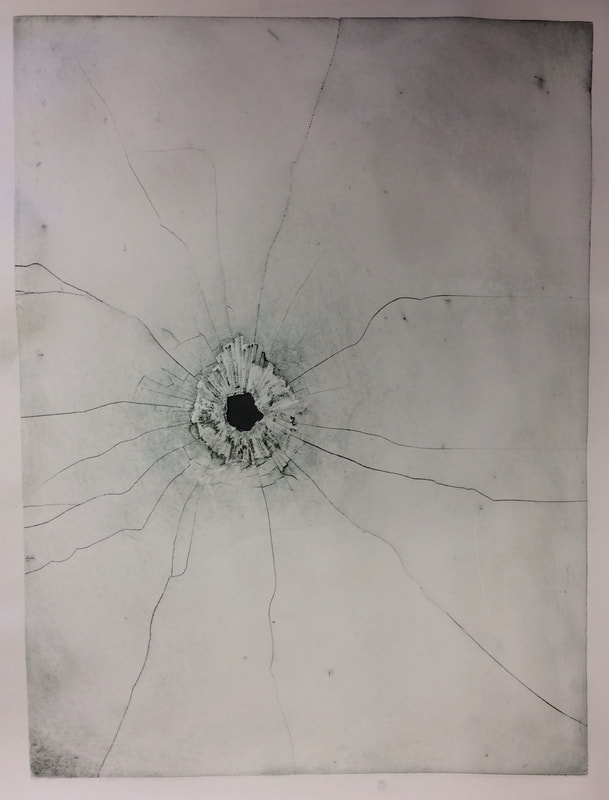 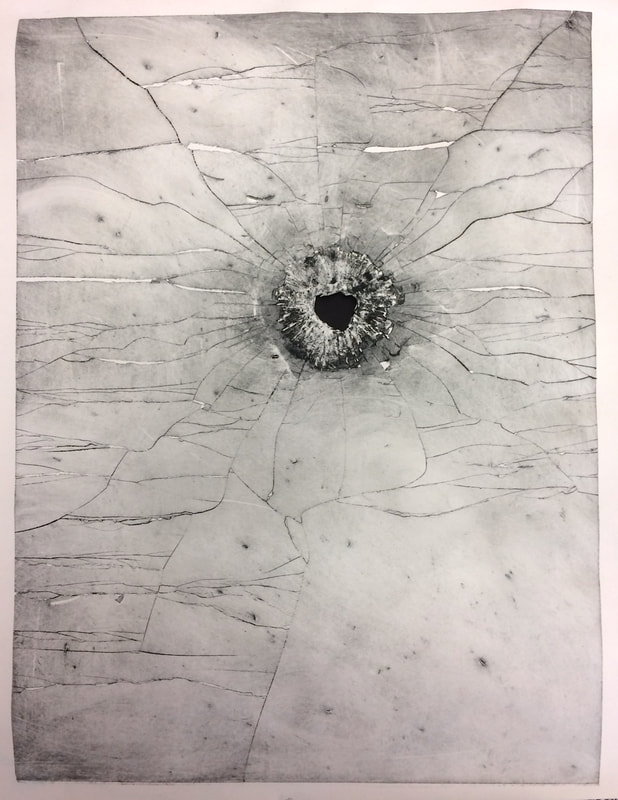 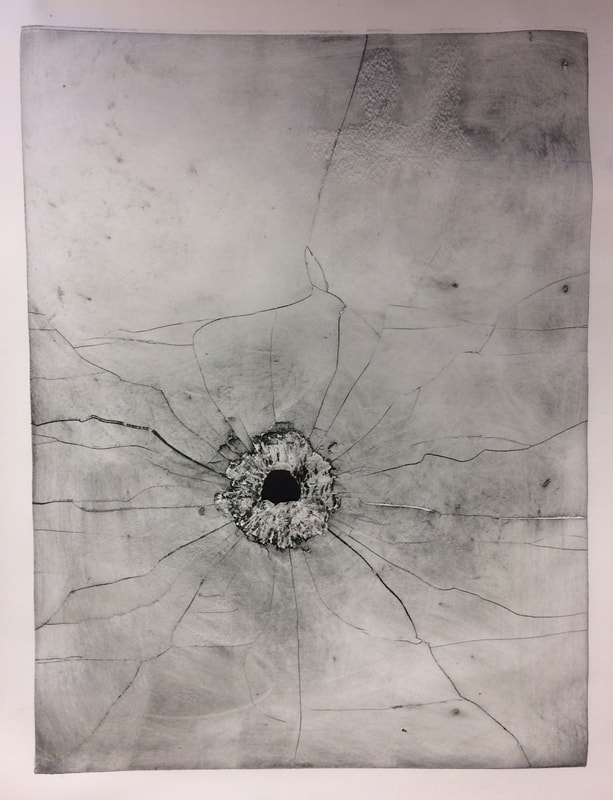 While Chris King was teaching at a high school in Massachusetts in 1993, one of his students murdered another boy in the history class down the hall, a tragic event that killed one 15 year-old boy and sent two other juveniles to prison. It was six years before the Columbine massacre, so there was no “real” fear of school shootings and no training for faculty like there is today. Columbine served as a catalyst for many institutions to instate lockdown training and made active shooter drills the norm on campuses across the country. King explains, "Over twenty-five years later as I prepare for a new school year, I consider my role as an artist and educator in this era of school violence. Recent discussion among colleagues and the community of bulletproof backpacks and arming faculty are signs of how desperate and paranoid we’ve become, a society defined by violence and terrorism. Teachers are now trained to face gunmen and fight, or to hide in their rooms and function in isolation, and be responsible for the lives of dozens of children. On the weekend, I find myself at the local shooting range for target practice, considering a new body of work. I'm beginning the series with these three prints to represent the three boys whose lives were violently shattered when I began my teaching career."
​
Born to Kill (2019) An interactive Installation and series of collaborative paintings by Chris King and John Sebelius
"Born to Kill" was a two-person show Chris King had with Kansas artist, John Sebelius. First exhibited at the KRUK Gallery, at the University of Wisconsin, the exhibit included over fifty portraits of legendary comedians (twenty-five done by each artist) arranged in "cloud" formations throughout the gallery.  Following a series of politically motivated work, King and Sebelius aimed to create something a bit lighter, a show that would unite their audience through laughter. The duo continued their collaborative painting process, shipping pieces back & forth to each other from Louisiana to Kansas as they developed the work and overall theme, that for this event, explored how comedy and what we perceive as "funny" changes over time. 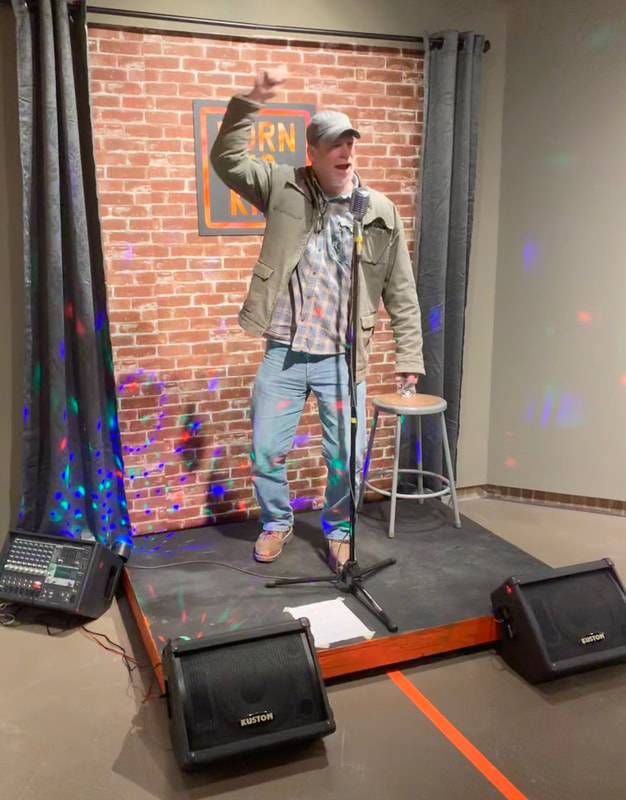 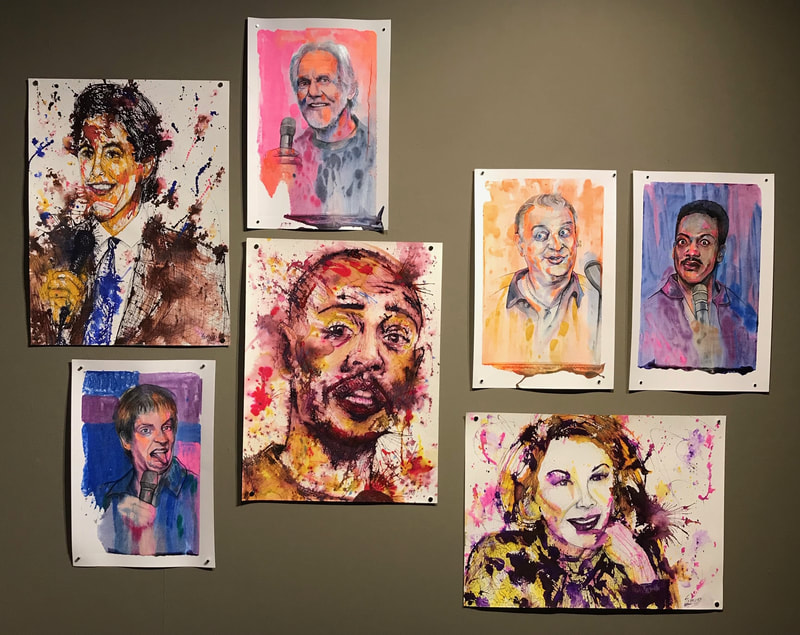 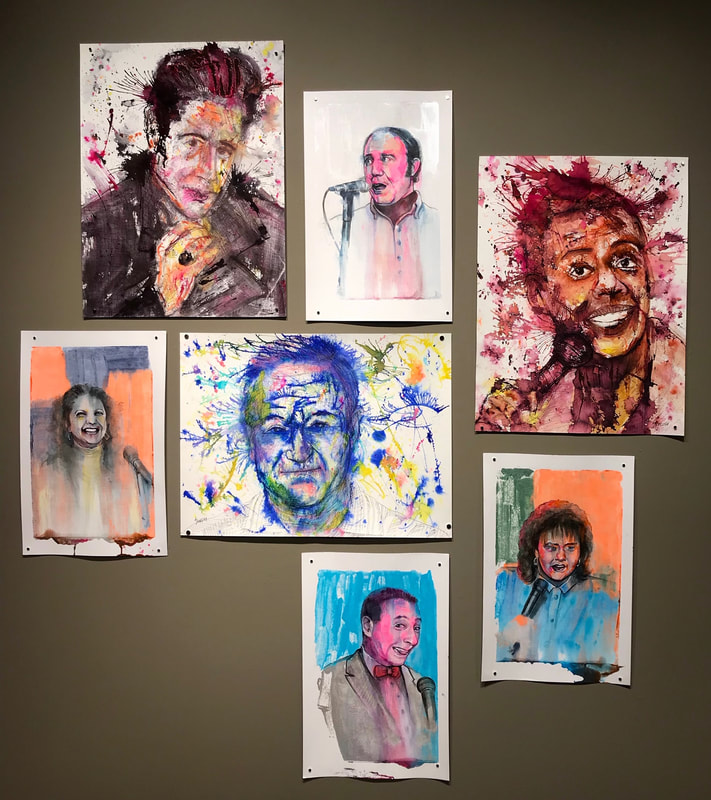 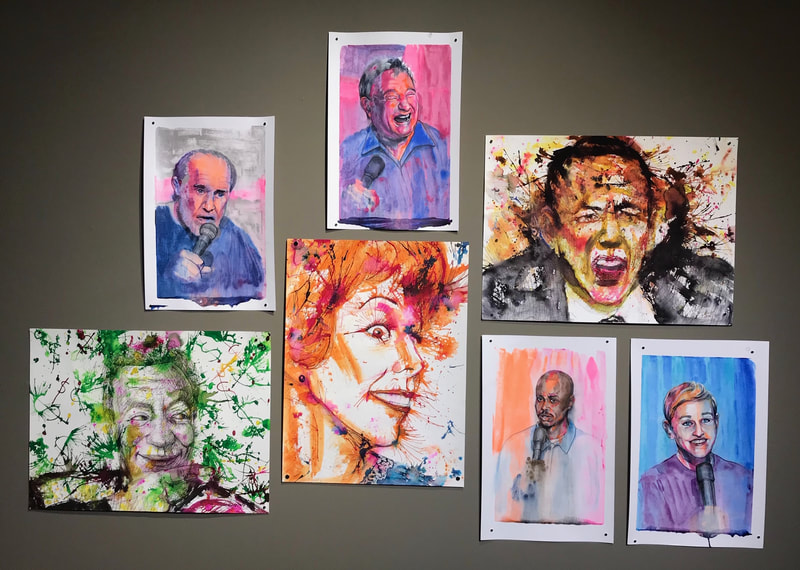 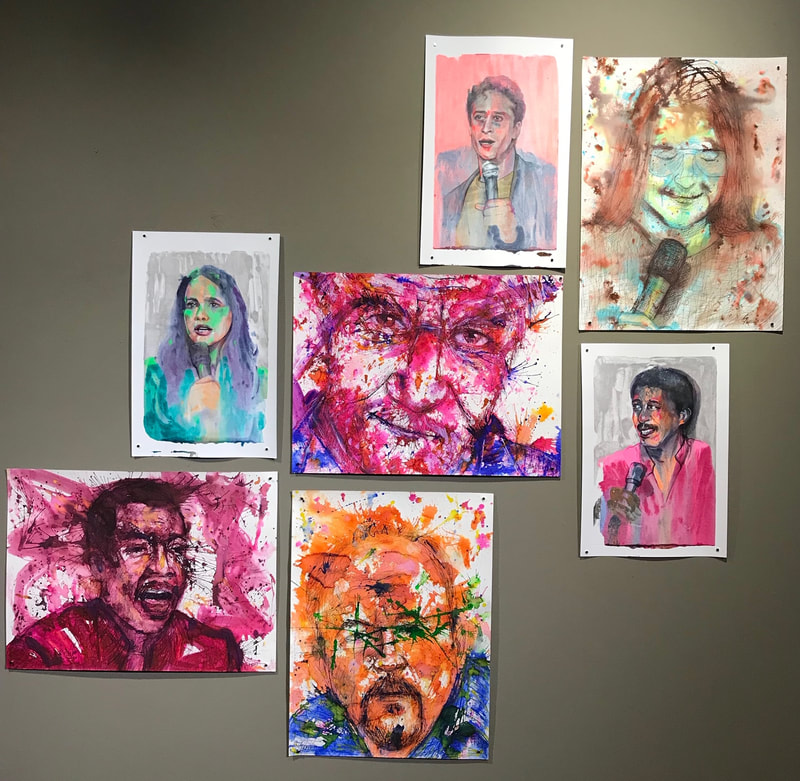 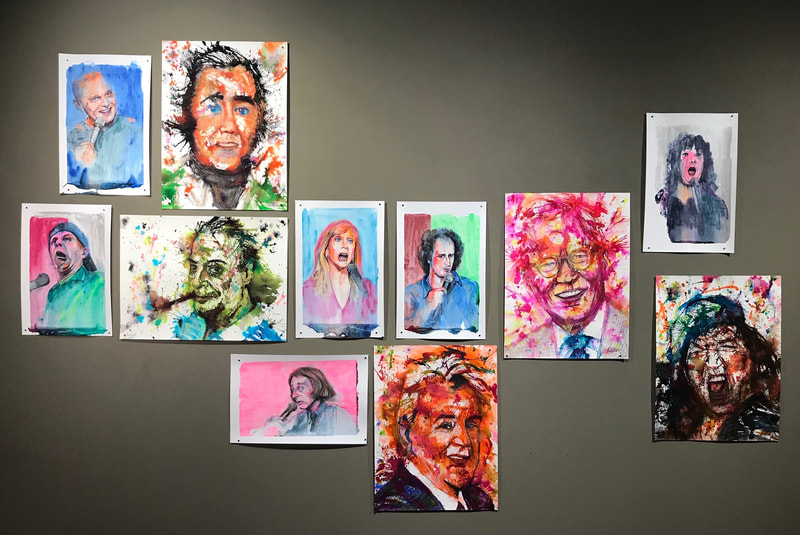 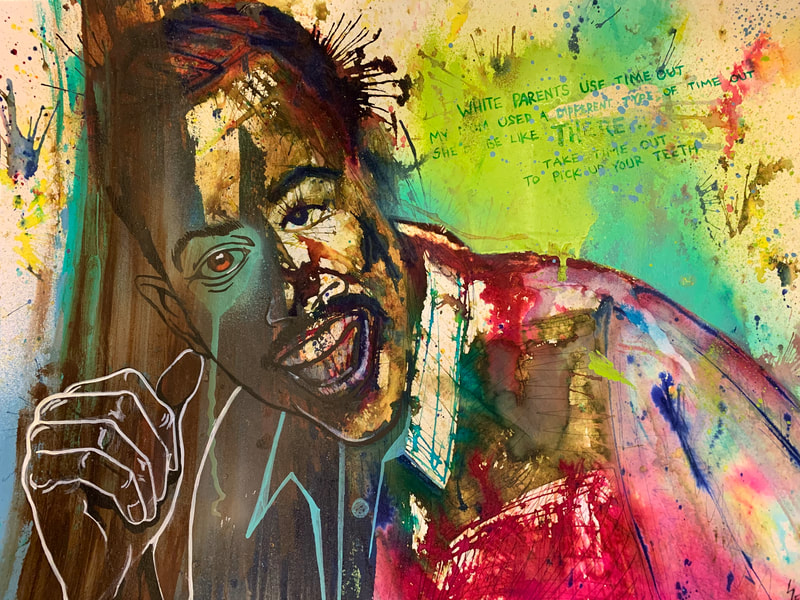 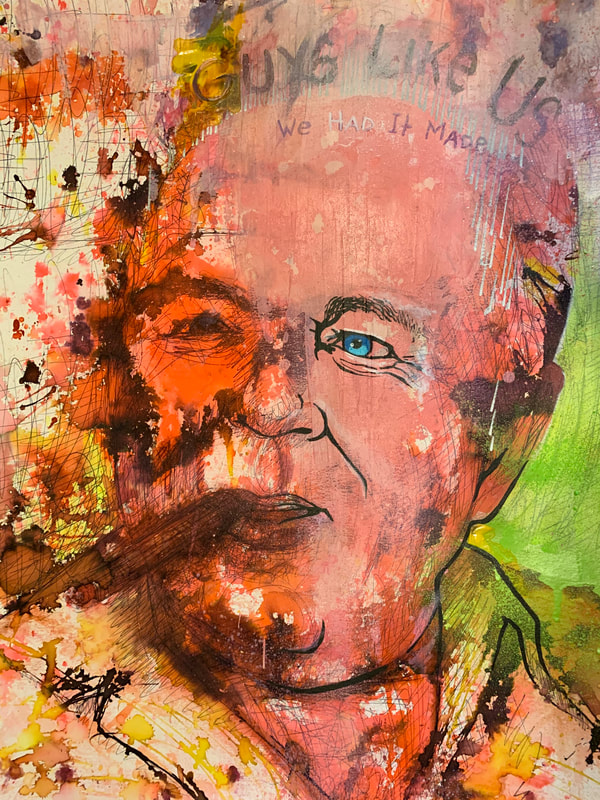 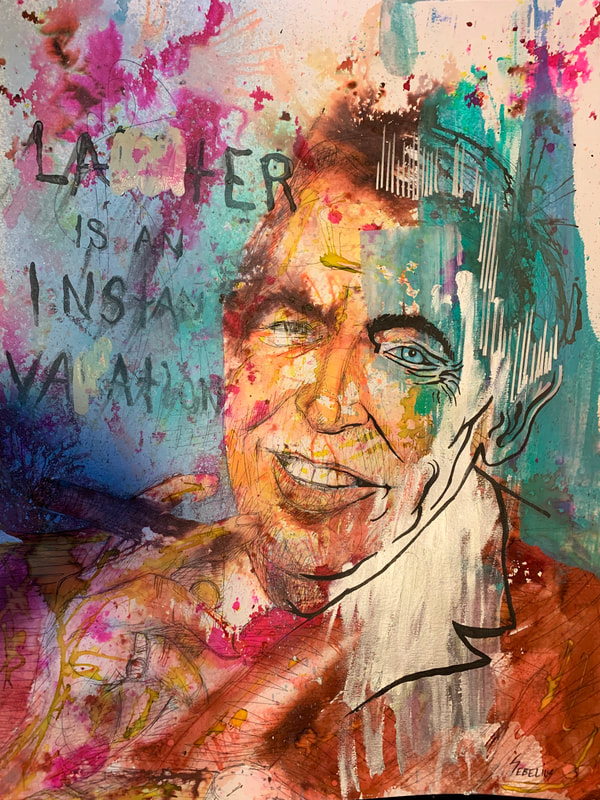 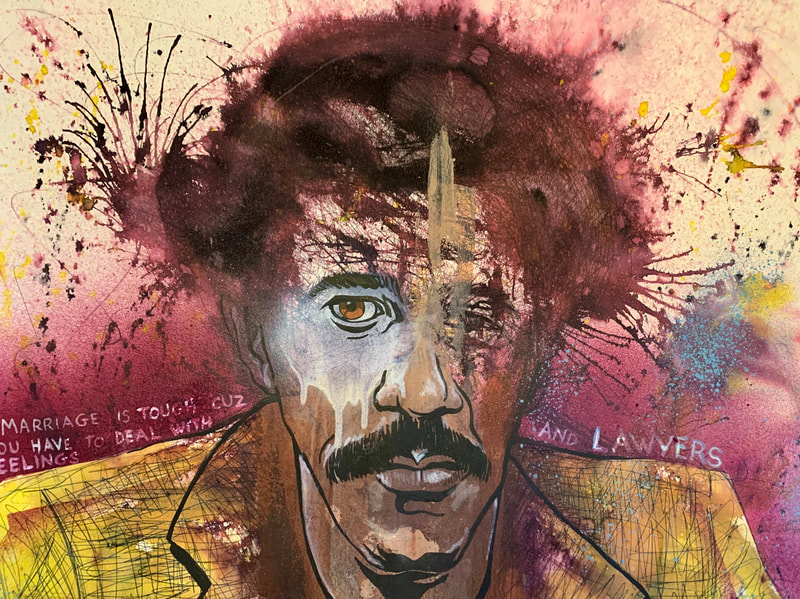 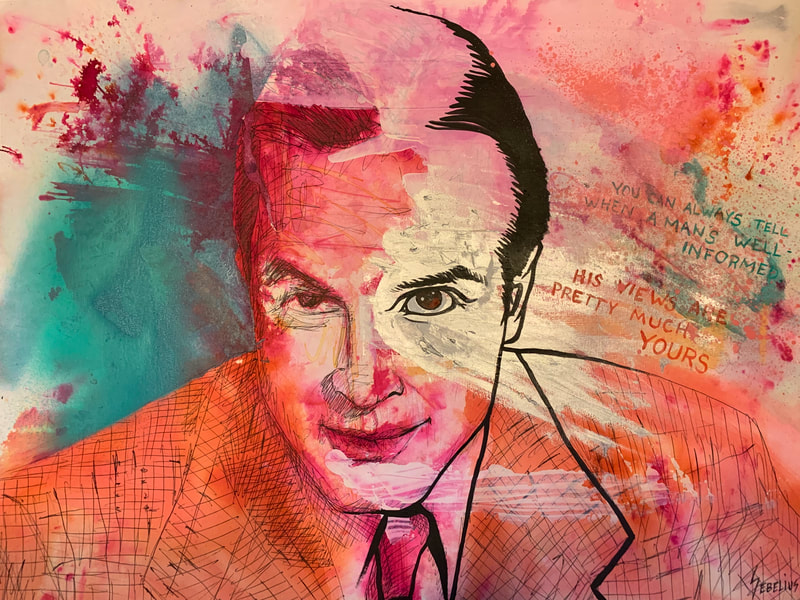 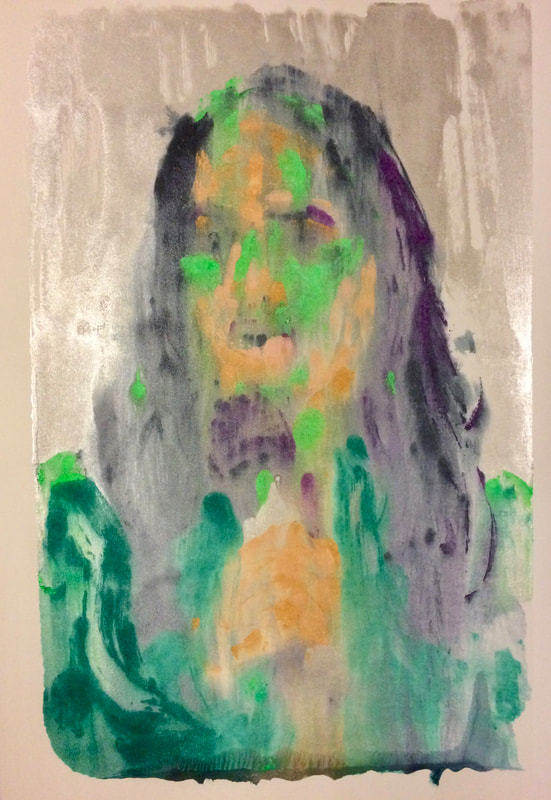 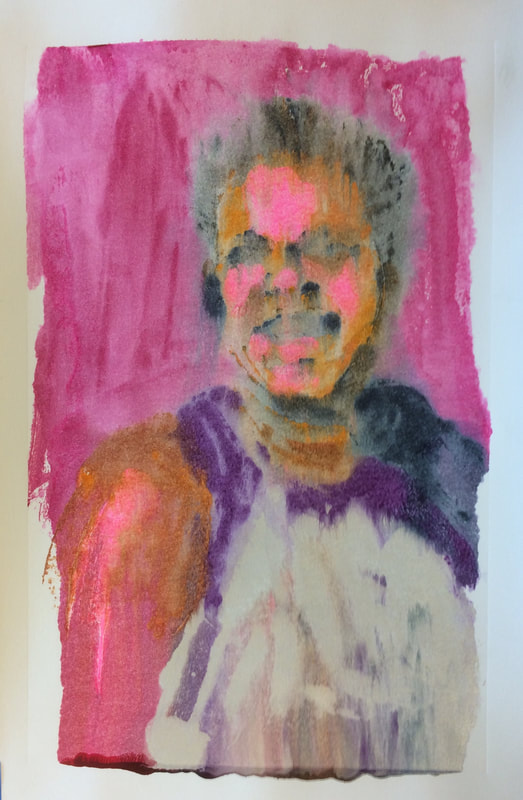 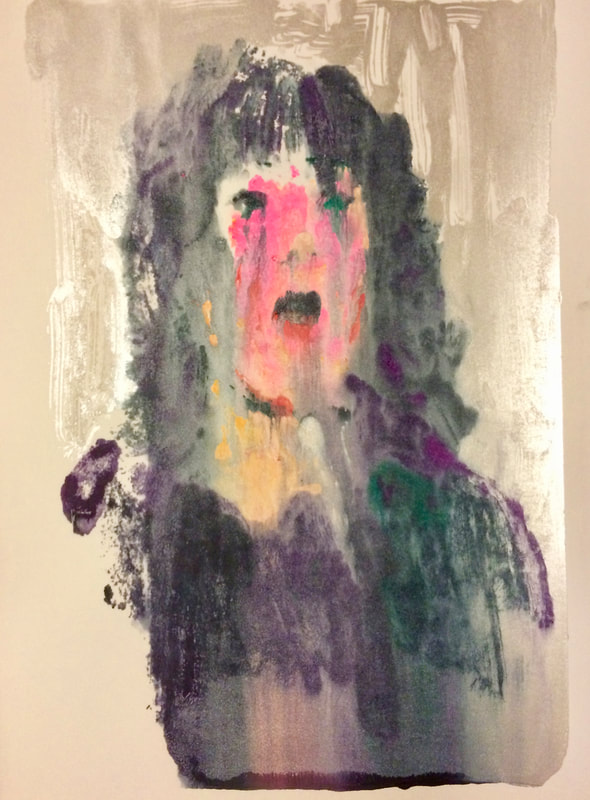 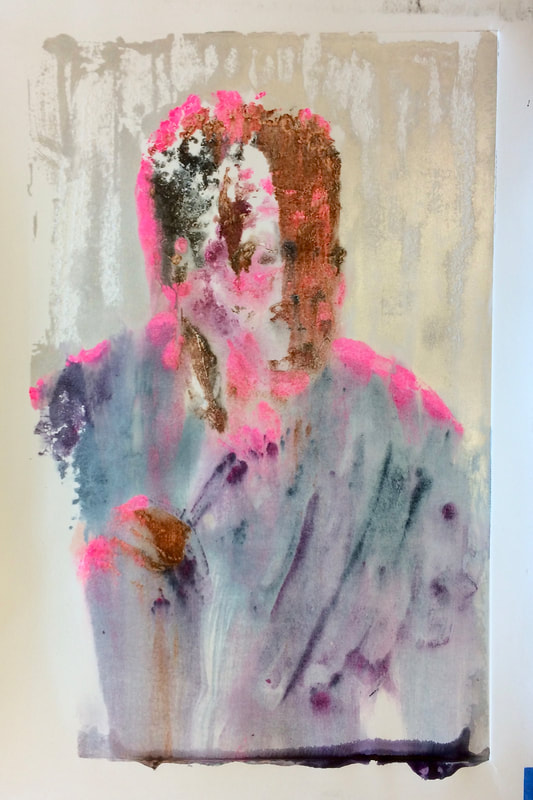 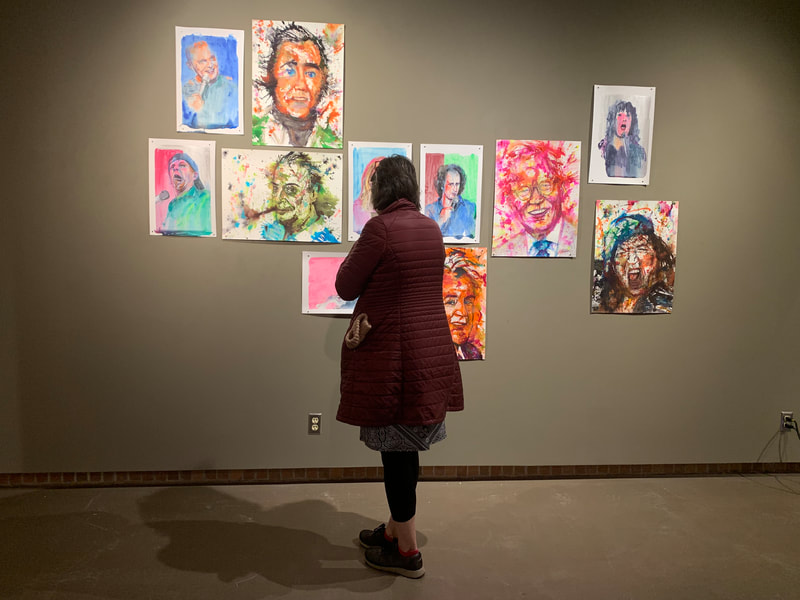 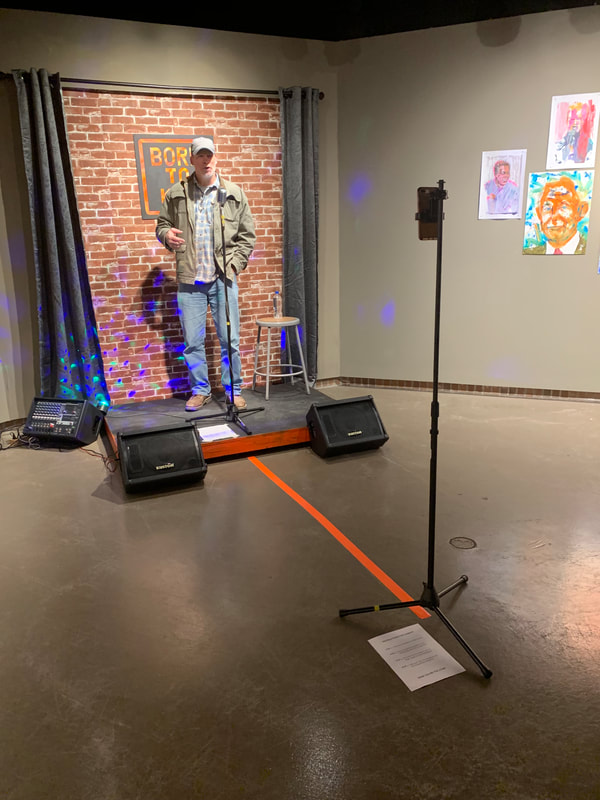 Born to Kill (installation) As a centerpiece in the space, the duo created a "Comedy Club" installation, inviting participants to record their own jokes and post them to #borntokillshow on instagram. The installation included a small stage, stool, brick vinyl, curtains, lighting, speakers, microphone, and cellphone stand, with a looping laugh track and theme music (by Aime Caron) playing from speakers. King explains, "The BTK show celebrates some of our favorite comedians, who we discovered at various points in our lives, and the process has given John and I a chance to share some hilarious stories and jokes with each other. We hope the show inspires the same in our viewers."